I became a Christian at nine years of age. I still remember sitting in the pew after I was baptized and feeling the water dripping from my hair and down my back. I remember standing in front of the church and receiving “the right hand of Christian fellowship.” One of my teachers hugged me in class on Monday and congratulated me on my decision for Christ. But for first-century believers, being a Christian was vastly different.

The writer of Hebrews said, “Remember those earlier days after you had received the light, when you stood your ground in a great contest in the face of suffering. Sometimes you were publically exposed to insult and persecution, at other times you stood side by side with those who were so treated” (Hebrews 10:32-33). For a Jew to make a public profession of faith in Jesus was, at best, to open yourself to public ridicule and often worse. Many lost their employment or the community would cease doing business with them. Sons were disowned by their fathers and wives faced severe repercussions from their husbands, including beatings. They were stripped of their possessions, even their homes, and many were imprisoned just for taking hold of new life in Christ.

How did these early believers respond to such awful treatment? Better than I would have. “You sympathized with those in prison and joyfully accepted the confiscation of your property . . .” (v. 34a). They found Joy in the persecution they faced. Why on earth? Because they weren’t thinking about earth. “You knew that you yourselves had better and lasting possessions” (34b). They were thinking about heaven and eternity. They were thinking about what Peter called, “an inheritance that can never perish spoil or fade – kept in heaven for you” (1 Pet 1:4).

They remind me of the apostles who, after being beaten by the Sanhedrin for preaching the name of Jesus, rejoiced “because they had been counted worthy of suffering disgrace for the Name” (Acts 5:41).

I live in the US where the cost of being a Christ-follower is mild compared to the early Christians and to believers today in places where faith in Jesus is tantamount to a death sentence. We might get insulted on social media, and some factions are working through the liberal courts to shut down Christian businesses, but on the whole, being a Christian here is not a hardship. And maybe that’s the problem. But I am certain it’s coming. The cultural winds are shifting to the left and blowing in real hatred for God and His people. You and I need to be ready. It takes a firm faith and an eye to eternity to rejoice in the face of persecution. Beloved, are you willing to suffer disgrace for the Name?

The first four words of Scripture tell you everything you need to know about the Bible: “In the beginning God . . .”(Gen. 1:1). The Bible, for all the people and stories it contains, is a book about God. We like to say it is about God and man, God and Abraham, God and Israel. We point to all God’s creative activity, which is worthy of note and awe. But the Bible isn’t about all God did and the humans he worked through. The Bible is about God. The story of Moses is the story of God. The story of David is the story of God. The stories of Jonah and the Apostles are all the stories of God. He is on every page, in every verse, and behind every story, even if His name is not mentioned.

That is because God is the creator and sustainer of all existence. If He were to somehow cease to be, which can never happen because He is eternal, the heavens and the earth – every mountain and tree, every planet and star would disappear. Paul said of Christ (who is fully God) “By Him all things were created: things in heaven and on earth, visible and invisible, whether thrones or powers or rulers or authorities; all things were created by Him and for Him. He is before all things, and in Him all things hold together” (Col. 1:16-17). And John the Revelator recorded the angels’ praise: “You are worthy, our Lord and God, to receive glory and honor and power, for You created all things, and by Your will they were created and have their being” (Rev. 4:11).

Get this – your story and my story is also the story of God. Paul said, “We live and move and have our being” in God (Acts 17:28). We would not exist without Him. We should seek every day to know Him. That is why I teach the Bible. That is why I encourage you to read and study for yourself. Listen to His amazing promise: “You will seek me and find me when you seek me with all your heart. I will be found by you, declares the Lord” (Jer. 29:13, 14). You don’t have to hope to know God, you just have to look for Him in the pages of His Word. Beloved, will you open your Bible and seek out the One who created you and loves you?

When I read in the Scriptures about the early church, I’m jealous. They had such an incredible experience witnessing “many wonders and miraculous signs” (Acts 2:43).  I long for the sense of purpose and community that they had: “They devoted themselves to the apostles’ teaching and to the fellowship, to the breaking of bread and to prayer” (v.42). They met daily and “broke bread in their homes and ate together with glad and sincere hearts, praising God (v. 46). And He blessed them greatly: “The Lord added to their number daily those who were being saved” (v. 47). What an exciting, fulfilling time to “belong to the Way” (9:2). Even the community outside of the faith appreciated them, “they enjoyed the favor of all the people” (47).

Well maybe not everyone.

After healing a man who had been crippled from birth, Peter and John proclaimed the gospel to the astonished crowd.  A great number of people believed and that angered the Jewish authorities. They questioned the apostles who then boldly proclaimed the name of Jesus to them. They commanded Peter and John to stop teaching in His name. Their response? “Judge for yourselves whether it is right in God’s sight to obey you rather than God. For we cannot help speaking about what we have seen and heard” (4:19-20). Later they arrested and flogged them. Remarkably, they rejoiced at their mistreatment “because they had been counted worthy of suffering disgrace for the Name” (5:17-41)

How very different from our modern, western culture, where religion is regarded as a personal preference and not a life-giving entity. In the US the battle cry is “separation of church and state,” and in our workplaces, schools, the public square, even among our peers, we are told to keep our religion to ourselves. Unlike the bold apostles, we do it because we don’t want to rock the boat. But true Christianity is all-or-nothing. It spills over into every aspect of our lives because “we cannot help speaking about what we have seen and heard.” We’ll gladly take the scorn of the world for the Name. Besides, it’s only going to get worse, not better. Beloved, if you are a follower of Jesus Christ, it’s time to not only rock the boat but get out of it and walk on the water. 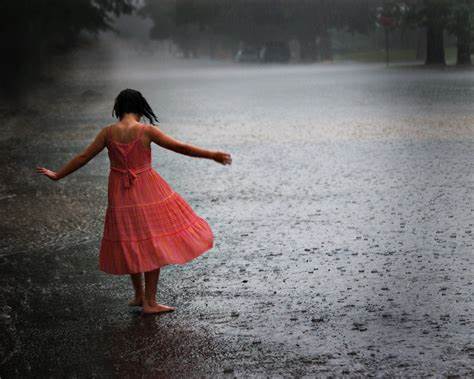 It began as a gentle rain on the first night of our retreat where forty hungry women gathered to hear from the Lord. The rain stirred something in the core of my soul and I cried out, “Rain down, Holy Spirit, rain down! Rain down on us! We need You Holy Spirit – Rain down!” As we continued to worship, the rain grew louder. We received it as a promise of God’s power and presence with us that weekend – a promise He kept as dead roots of bitterness, anger, shame, unworthiness, guilt, pain, and pride were pulled up and livings roots of peace, joy, purpose, healing, forgiveness, and hope grew deep and strong. It reminded me of another time the Holy Spirit rained down.

The disciples and followers of Jesus were all gathered together in Jerusalem after His death and resurrection and something amazing happened. “When the day of Pentecost came, they were all together in one place. Suddenly a sound like the blowing of a violent wind came from heaven and filled the whole house where they were sitting” (Acts2:1-2). They were empowered to speak boldly about Jesus, even in languages they did not know. Thousands heard them and came to salvation through the message of a simple fisherman, filled with power from on High. This was the fulfillment of a promise made through the prophet Joel. “I will pour out my Spirit on all people. Your sons and daughters will prophesy, your old men will dream dreams, your young men will see visions. Even on my servants, both men and women, I will pour out my Spirit in those days” (Joel 2:28-29). It was this same Spirit that fell on a small gathering of women as refreshing rain.

I believe this Spirit is missing in most of our churches. And most of our lives. We desperately need the Spirit of truth and wisdom. The Spirit of boldness and power. The Spirit of Holy Love and compassion. Without Him, we are just “going through the motions” – empty people with empty hearts and empty hands. Beloved, do you want more Life in your life? Does your church need power? Wisdom? Truth? Boldness? God is still moving and working in the world. Invite His Holy Spirit to rain down – and reign over – your life. You will never go through the motions again.